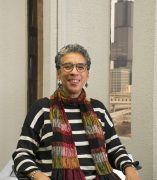 Rhodes is trained as a mass media historian with a specialization in African American history and culture. She focuses on the study of race, gender, and mass media; the history of the black press; media and social movements; and African American women’s history. She is particularly interested in how aggrieved communities have used print culture, film, electronic media, music, and other expressive cultures as modes of resistance and empowerment. Her work also explores the gender politics of African American communities and the experiences of transnational black subjects.

Rhodes’ first book Mary Ann Shadd Cary: The Black Press and Protest in the Nineteenth Century (Indiana University Press, 1998), was named the best book in mass communication history by the Association for Education in Journalism and Mass Communication. A second edition is in development. Her second book, Framing the Black Panthers: The Spectacular Rise of a Black Power Icon is now in its second edition (University of Illinois Press, 2017). Rhodes has held a Radcliffe fellowship and visiting fellowships at the University of Cambridge and the University of Bristol in the U.K. These were in support of her current project, a biography of a black American expatriate and psychoanalyst Transatlantic Blackness in the Era of Jim Crow: The Life of Marie Battle Singer. Rhodes is also building on her long-standing interest in how persons of African descent use media to carve out spaces for political, intellectual, and cultural exchange with a book-in-progress, Rebel Media.