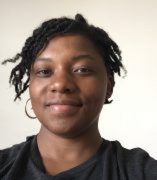 Dr. Freda Fair is an interdisciplinary scholar and teacher who studies race, gender, sexuality and culture in the United States with a focus on the American Midwest. Freda’s research areas include queer politics and aesthetics, black gender and sexuality studies, women of color feminism, queer of color analysis, intersectionality, visual culture, and social movement and labor responses to policing and criminalization. Their in-progress book manuscript examines the emerging concept of “the Black Midwest” to argue that black struggles for freedom in the Midwest radically mobilize the region as a strategy to unsettle US liberal capitalist state power while uncovering pivotal social and political erasures on which national unity depends. Guided by visual cultural and historical archival materials, the study asserts that even as Blackness has been posited as peripheral to the Midwest, fugitive and queer Black Midwest resistance against slavery, sexual criminalization, anti-black and anti-queer life expectancy discourses, and police brutality demonstrate the centrality of black culture to the region. Freda’s work in the university is informed by collaborations with community-based libraries, archives, and museums. Freda earned their Ph.D. and M.A. in Gender Studies from the University of California, Los Angeles, and their B.A. in American Studies with minors in Women’s, Gender, and Sexuality Studies, Spanish, and African American Studies from Macalester College.