Conducted in Fall 2018, Mario LaMothe speaks about his journey to the Department as well as his academic research and interests. 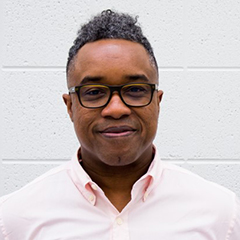 “…I consider ethnography to be an exchange, in which we attempt to even out power dynamics. It’s a call and response.”

So how long have you been at UIC?

Mario LaMothe: I came to UIC in July 2016 as a post-doctoral associate at the African-American Cultural Center. My responsibilities included facilitating the Center’s community service and exchanges––communities on and off campus as well as intersecting my own research with the Center’s foci. I was also the resident curator who created and implemented the exhibits and programs. I transitioned to this department in August 2018.

Can you describe how your work and research in anthropology relates to African-American Studies?

LaMothe: Well, I consider ethnography to be my primary research methodology, which is rooted in Anthropology. But I’ll go back a step back to explain the relationship. I earned my doctorate in Performance Studies at Northwestern University. My research deals with African diaspora religious cultures, primarily Haitian Vodou. My current project focuses on contemporary Haitian choreographers who use the philosophies, aesthetics, and ethos of Vodou. I examine how the dancing body allows them to mediate what people on the island and elsewhere think they know about Vodou. I find it intriguing that the choreographers attempt to demystify certain concepts about Haiti and Haitians, such as the “Voodoo mumbo-jumbo” representations of Haiti and Black people who practice African-derived religions. My collaborators position Vodou as a means to foster the intergenerational transfer of culture and a very practical form of socialized medicine. Vodou links Haitians and their allies to their past and future.

I conduct my research through participation in an observation of the choreographers’ process and performances. This means that I sit in rehearsals and company meetings, I tour with them or attend presentations. I interview the artists and their creative teams, spectators, and producers. My collaboration with the artists extends beyond trying to further my own research project. I’m their consultant. It’s worth clarifying here that I was a performer, arts manager, and producer before my doctoral studies. In this light, I consider ethnography to be an exchange, in which we attempt to even out power dynamics. It’s a call and response. I was trained in a particularly critical and very ethical form of ethnography, which accounts for my position as a Haitian American scholar here in an American academy who may have a lot more resources than my collaborators. I also critically acknowledge that my interlocutors know that Haitians and Black people have been misunderstood and superficially translated anthropological subjects, yet they chose to entrust me with the information they feel has power and value. This dynamic strongly determines how I shape a project beneficial to all of our communities combined. Additionally, ethnography aids me in creating a conversation between Performance Studies, African American Studies, Anthropology, and Haitian Studies.

Going off of that. You’re currently working on your manuscript Vodou/Voodoo Bodies and Vodou/Voodoo has come up in your work and research, can you elaborate on why and how it plays a large part in your work?

LaMothe: [laughs] Well, that’s a working title subject to change. I’m interested in Haitian Vodou as a community, everyday, contemporary practice. When I say “Voodoo” without an ethnonational identifier, I mean the malignant “Hollywood” fantasies of the practice, which I make sure to differentiate from African American or Louisiana Voodoo––it too follows social medicine methods and objectives similar to Haitian Vodou and contends with Voodoo fantasies. But that’s a conversation for another interview.

I was raised in Haiti, in a middle-class society in which we reject or feign ignorance about Vodou because we’re good respectable Christian folks. When I began fieldwork in 2008, I attended Vodou ceremonies in Haiti to figure out for myself if what I learned from the fantasies or in academic texts held up. I didn’t practice Vodou then, and I’m more sensitive to the practice now. The more I attended and participated in ceremonies, the more I began to understand how being there actually bonds and heals the congregants. It definitely creates a community. It gives them/us a sense of purpose. It ties us to our African ancestry and their modes of expression and gives Haitian a vision of themselves wherever Haitians are in the world. Vodou’s songs, dances, oral traditions, and visual dynamics shed light on Haitians’ past, present, and future aspirations as the country goes through changes.

I meditate on all of those ideas in my research and creative work. That’s how the project changed from one in which the artists were concerned with projecting themselves or not as contemporary and cosmopolitan. But, following fieldwork in Vodou spaces, I began to understand how Vodou philosophies, divinities and symbols permeated the choreographers’ works or how they are reflecting upon or intentionally bypassing those. One of the choreographers said to me: “When we tour the US or Canada or Venezuela, we understand that people are looking at us, and expecting us to do “Voodoo” on stage. The Western gaze is really strong. Sometimes we just do what we do. We are who we are. You take it or leave it. And sometimes, we are really methodical, provocative, and intentional in trying to rectify their expectations.” My project tries to weave all of those threads into a tapestry.

As a new professor for African American Studies, what are you looking forward to doing within the department? What courses are you most excited to teach/bring to students at UIC?

LaMothe: I like that question. UIC’s diaspora cluster initiative searched for a specialist in African or African diaspora arts and expressive cultures. I was hired to provide my expertise in Black and Caribbean performance theory. Additionally, there is always a performative or creative component to every single class I’ve taught, whether it’s the midterm or the final project. The students learn to value the idea of praxis: experiential learning not only through theorizing but also through doing and experiencing those ideas first-hand. For instance, in my Honors College class “Pedagogies of Protest,” the final project was a student-curated exhibit. Participants mounted activist interventions at Student Center East, engaged with their classmates on a topic that was dear to them and their communities, contextualized that experience in written assignments and artistic statements, and translated all of it in the form of an exhibit for the Center’s audiences. I also draw from my knowledge as a community organizer, LGBT rights activist and sexual health education program for men who sex with men in Haiti. These experiences are at the disposal of my two departments as I teach courses such as “Performing Africanist Spirituality,” “Introduction to African Diaspora Studies,” “Performance Ethnography,” and “African Diaspora Dances.”

I’m in Aaron Hughes’ National Veteran Museum class and we’re paired with a fellow that focuses on performance art for the Chicago Cultural Center triennial next year.

LaMothe: As a dance scholar, I hear from my colleagues that academic spaces privilege the fact that we’re talking heads. But I wonder if engaging, dynamic and social justice projects wouldn’t be more generative if we actually put our body on the line with our interlocutors? How would the project grow and expand? Wouldn’t our “informants” become interlocutors and allies, as a result? At the very least, these ideas are not new to Haitians. Let’s work and walk together, I’ve learned. It’s a good philosophy for students interested in art and expressive cultures.

What would you say to a student who is thinking about majoring or African-American studies?

LaMothe: That’s a really big question. Well, after a bachelor’s or master’s degree, you need to get a good job so you can make a living. That’s how you become a grown and fully realized person. Right? That’s what students hear from their parents, friends, counselors, and the random stranger on the El. Consequently, students orient themselves or are directed toward a field that will yield a good job, which should fulfill them in the long run. If only that were true. It’s my roundabout way of saying that African American Studies sharpen students’ critical thinking process. We invest in teaching students to be discerning and passionate about whatever profession they choose, to see and go beyond the surface and the superficial, and figure out how to expand and/or advance knowledge that contributes to balanced and equitable lives. Students appreciate how to build and strengthen caring communities. Regarding why one should major in African American Studies, that’s what it meant for me to join this department and dialogue with my colleagues who also hail this and a number of other disciplines. African American Studies reminds me (and I hope students) that we don’t yet have the privilege of sleepwalking through the day. The interdisciplinary field of studies also gives students a clearer comprehension of the foundations of their everyday lives by foregrounding concepts related to wellness, spirituality, social justice, joy, and kinship in Black communities, on these bodies’ own terms.