Amanda McDonald is the 2019 Grace Holt Memorial Awardee and alum of the Department. She speaks about her experience presenting at Association of Black Sociologists conference in New York Summer 2019 and how her degree in African American Studies helped prepare her. She currently works at the Institute on Race and Public Policy. This interview was conducted Fall 2019 by Carlos Bossard. 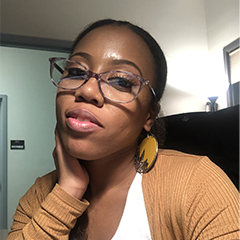 “…make this space your own and make this place your own. Look for those or find a place where you fit in, feel comfortable. And if you don’t have one, if you can’t find one, then make one yourself.”

Thank you so much for sitting down with me and congratulations on getting the Grace Holt Memorial Award for 2019. I just kind of want to get to know you a little bit. Tell me what you’re doing here at the school, any information that you want to give to anyone?

Amanda McDonald: Sure. So, I graduated earlier this year. Right now, I’m working as the interim office manager for IRRPP, The Institute for Research on Race and Public Policy in the CUPPA building. And I’m also doing a little big of research with this institute of well.

Your research is about “Black undergraduate students and their access to social support services on campus and establishing community among their peers”. I was wondering if you could tell me a little bit about where that interest came from and why is that important to you?

McDonald: Sure. My interest in that research topic came from me transferring here. Originally, I’m from the south suburbs of Chicago, but I did my first two years of university in Minnesota.

That’s where I’m from!

McDonald: Really?! I went to St. Kates! I did my first two years there, and then I was like “whoa, whoa, whoa, this is so much different, I don’t like it here”. So, when I came here I expected it to be different. Originally when I was at St. Kates I couldn’t find my own areas to fit in, so that’s why I ended up leaving. And when I came here, I expected there to be more resources or students who take more advantage of those resources, and I felt the same about that. There weren’t really that many Black students taking advantage of the either the resources that are geared towards Black students here or there wasn’t what I expected of Black community among Black students

You’ve done your research and you were looking at UIC, the campus as a whole and the resources that were provided. How do you think now UIC is doing now in providing services and support to Black students, and specifically, undergrad students?

McDonald: I wouldn’t rate it all because I have seen so many new things compared to the last two and a half years that I’ve been here. But I know services like AAAN, and the cultural center, now that Professor Blair is the director, I see she’s starting to do new things. So, I’m excited to see these new changes for sure.

What is one piece of advice that you would give to black undergraduates about navigating this campus?

McDonald: One piece of advice would be to make this space own and make this place your own. look for those or find a place where you fit in, feel comfortable. And if you don’t have one, if you can’t find one, then make one yourself.

I love that. That’s really important, too. If you can’t find it, then make it, do it. Cause I’ve always learned that if you are feeling one way, or have a question, or something, there is going to be at least three to five people that have the exact same feeling or feel the exact same way.

McDonald: Yeah! And that’s what I found in my research. At first, I interviewed staff and faculty, and staff and faculty had a lot of the same sentiment in what they experienced here with, in comparison to what students experience as well. So, I was just really intrigued because usually students and faculty don’t get the opportunity to have that conversation. To be speaking with different faculty and to hear them say that sometimes they feel isolated or whatnot on campus was definitely intriguing

You presented at the Association of Black Sociologists conference recently. Could you tell me a little bit more about how that went, your experience?

McDonald: Sure. So I was in New York, and I learned that I hate New York, I love Chicago so much more. But it was very nerve wracking. I ended up presenting on a panel titled Historically White Institutions, and it said something about like Black Student Blues or something similar to that. I presented on the panel with everybody else who was getting their Ph.D., and I didn’t know that at the time. When I found out, when I was sitting there and everybody was introducing themselves and saying where they were going to graduate school, I was like, “Oh, okay, this is going to be different”. Everyone was getting their Ph.D. We only had 10 minutes per person to present. When I did my presentation here in the department, that was 30 minutes, so I had to, on the spot, cut that.

McDonald: It was. It was a little difficult. that was my first time presenting and not having an advisor there, like an advisor to look over my stuff before. I had to figure out what was the most important thing to present. And that really made me think about it, because even when I did my thesis, my thesis was twenty-two pages, I think. So had a lot to say but I didn’t know how to make it concise.

Did you feel like being on that panel with these students or these professionals, I guess, getting their Ph.D.’s, how did that affect you? Did you feel uplifted that you were the youngest one or did you feel like it was them against you?

Take me back to the day that you won the Grace Holt Memorial Award. How were you feeling? What was running through your mind?

McDonald: First thing I think was probably that I thought it was a mistake. I had to read it again and be like, “Hold on, is this the right Amanda McDonald?”, because that name is very common. But then I was like, wow! I was really amazed. I was really taken back. I didn’t think I won it because for one, it’s very rare that I ever see like that large amount of money at once. So, I was like, whoa! Yeah, that’s crazy. But yeah. I know like throughout the whole process of me winning it and speaking on winning it, I know I definitely felt honored at the fact that people appreciated what I had to say about my research and people appreciated my work ethic and the stuff that I brought academically.

And I have so many classmates and colleagues that are doing, brilliant, amazing stuff. It really felt honored.

McDonald: That’s a good question. It means so much to me. It means so, so, so much to me. One of the projects that I did my senior year, I looked to see if the services we provided on campus that start with “African American” if that was inclusive to all Black identities, for example. Because personally, I feel like African American can be considered an ethnicity, where Black is more of a racial identity. I feel like the term “Black Studies” encompasses more identities and ethnicities, for example. I am excited for that and I hope that the curriculum reflects it. Even though I know I saw that before, when it was AfAm.

So you’ve graduated now. You’re working and did your research. How do you plan on keeping the legacy that you now have with the Grace Holt Memorial Award alive? Like, what are you planning on doing with the research as you keep moving forward now working in the CUPPA building at the Institute for Research on Race and Public Policy?

McDonald: [laughs] I didn’t know I had a legacy! I have no idea, to be honest. I know that I’m still interested in research in general. Especially with racial and ethnic identities. But I don’t know exactly. And I think that, lowkey, may be part of my legacy is that I don’t have it all planned out, and I won’t ever have it all planned out, and I’m fine with that. Whatever I do, I know I’ll be taking that award with me, thinking about the fact that I got it, and the weight and the meaning behind the word definitely matters to me. I’m not exactly sure I’ll take this legacy. I know I do eventually want to go grad school, for what, who knows. But just knowing that, and reading about Grace Holt, and her papers and everything in the archives, and knowing how often she had to face adversity, and she was able to overcome so many things, definitely fuels a lot of the academic work that I do for sure.

So at your new job, what does this job mean to you? Your new one at IRRPP, what does that mean to you with your work, personally, and what are your goals for being in that space?

McDonald: That job means that I get to explore what I’m interested in when it comes to research. We study and research about so many different things. The institute itself has published so many reports about different communities within Chicago. Our most recent one is about Native Americans within Chicago, and the resources or lack of resources that they have here. With the institute studying race and ethnicity, I appreciate that I’m not just researching black populations, for example, but I do get to research what race and ethnicity means to different communities. It means that I get to be more branched out.

Listen to the full interview on SoundCloud!